One of hundreds of strains of the bacterium Escherichia coli, E. coli O157:H7 is an emerging cause of food borne and waterborne illnesses. Although most strains of E. coli are harmless and live in the intestines of healthy humans and animals, this strain produces a powerful toxin and can cause severe illness. E. coli O157:H7 was first recognized as a cause of illness during an outbreak in 1982 traced to contaminated hamburgers. Since then, most infections are believed to have come from eating undercooked ground beef.

However, some have been waterborne. In 1999, people became sick after drinking contaminated water in Washington County, New York and from swimming in contaminated water in Clark County, Washington. Information about the health effects of E. coli O157:H7, and actions you can take to protect yourself and your family from E. coli infection is provided below. 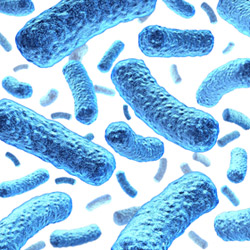 What is E. coli and where does it come from?

E. coli is a type of fecal coliform bacteria commonly found in the intestines of animals and humans. E. coli is short for Escherichia coli. The presence of E. coli in water is a strong indication of recent sewage or animal waste contamination. Sewage may contain many types of disease-causing organisms.

What are fecal coliforms?

Fecal coliforms are bacteria that are associated with human or animal waste. Presence of fecal coliforms in water may not be directly harmful, and does not necessarily indicate the presence of feces, however it does indicate an increased likelihood of harmful pathogens in the water.

How does E. coli or other fecal coliforms get in the water?

E. coli comes from human and animal waste. During rainfalls, snow melts, or other types of precipitation, E. coli may be washed into creeks, rivers, streams, lakes, or groundwater. When these waters are used as sources of drinking water and the water is not treated or inadequately treated, E. coli may end up in the drinking water.

E. coli O157:H7 is one of hundreds of strains of the bacterium E. coli. Although most strains are harmless and live in the intestines of healthy humans and animals, this strain produces a powerful toxin and can cause severe illness. Infection often causes severe bloody diarrhea and abdominal cramps; sometimes the infection causes non-bloody diarrhea. Frequently, no fever is present. It should be noted that these symptoms are common to a variety of diseases, and may be caused by sources other than contaminated drinking water.

How long does it take for these symptoms of E. coli O157:H7 infection to occur?

Symptoms usually appear within 2 to 4 days, but can take up to 8 days. Most people recover without antibiotics or other specific treatment in 5-10 days. There is no evidence that antibiotics improve the course of disease, and it is thought that treatment with some antibiotics may precipitate kidney complications. Antidiarrheal agents, such as loperamide (Imodium), should also be avoided.

What should I do if I have any of the above symptoms?

Consult with your physician. Infection with E. coli O157:H7 is diagnosed by detecting the bacterium in the stool. Most laboratories that culture stool do not test for E. coli O157:H7, so it is important to request that the stool specimen be tested on sorbitol-MacConkey (SMAC) agar for this organism. All persons who suddenly have diarrhea with blood should get their stool tested for E. coli O157:H7.

Are there groups of people who are at greater risk of getting any of the symptoms?

Children under the age of five, the elderly, and people whose health is weakened (i.e., people who have long-term illnesses such as cancer or AIDS) are at greater risk of severe illness.

What should these people who are at greater risk do? Are there any additional precautions they should take?

People who are at greater risk should consult with their doctor or health care provider and follow the instructions provided.