Thirsty? How ’bout a cool, refreshing cup of seawater? 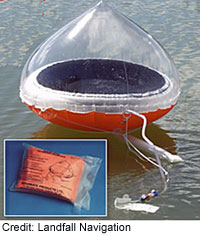 No, don’t take us literally! Humans cannot drink saline water. But, saline water can be made into freshwater, which is the purpose of this portable, inflatable solar still (it even wraps up into a tiny package). The process is called desalination, and it is being used more and more around the world to provide people with needed freshwater. Most of the United States has, or can gain access to, ample supplies of fresh water for drinking purposes. But, fresh water can be in short supply in some parts of the country (and world). And, as the population continues to grow, shortages of fresh water will occur more often, if only in certain locations. In some areas, salt water (from the ocean, for instance) is being turned into freshwater for drinking.

The “simple” hurdle that must be overcome to turn seawater into fresh water is to remove the dissolved salt in seawater. That may seem as easy as just boiling some seawater in a pan, capturing the steam and condensing it back into water (distillation). Other methods are available but these current technological processes must be done on a large scale to be useful to large populations, and the current processes are expensive, energy-intensive, and involve large-scale facilities.

Here are our parameters for saline water:

The worldwide need for freshwater 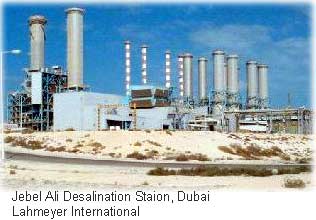 The scarcity of fresh water resources and the need for additional water supplies is already critical in many arid regions of the world and will be increasingly important in the future. Many arid areas simply do not have fresh water resources in the form of surface water such as rivers and lakes. They may have only limited underground water resources, some that are becoming more brackish as extraction of water from the aquifers continues. Solar desalination evaporation is used by nature to produce rain which is the main source of fresh water on earth. All available man-made distillation systems are a duplication on a small scale of this natural process.

Desalination is not modern science

Desalination/distillation is one of mankind’s earliest forms of water treatment, and it is still a popular treatment solution throughout the world today. In ancient times, many civilizations used this process on their ships to convert sea water into drinking water. Today, desalination plants are used to convert sea water to drinking water on ships and in many arid regions of the world, and to treat water in other areas that is fouled by natural and unnatural contaminants. Distillation is perhaps the one water treatment technology that most completely reduces the widest range of drinking water contaminants.

In nature, this basic process is responsible for the water (hydrologic) cycle. The sun supplies energy that causes water to evaporate from surface sources such as lakes, oceans, and streams. The water vapor eventually comes in contact with cooler air, where it re-condenses to form dew or rain. This process can be imitated artificially and more rapidly than in nature, using alternative sources of heating and cooling.

The above diagram and information is courtesy of Desware: The Encyclopedia of Desalination and Water Resources.

Your own personal desalination plant

Remember looking at the picture at the top of this page of a floating solar still? The same process that drives that device can also be applied if you find yourself in the desert in need of a drink of water.

The low-tech approach to accomplish this is to construct a “solar still” which uses heat from the sun to run a distillation process to cause dew to form on something like plastic sheeting. The diagram to the right illustrates this. Using seawater or plant material in the body of the distiller creates humid air, which, because of the enclosure created by the plastic sheet, is warmed by the sun. The humid air condenses water droplets on the underside of the plastic sheet, and because of surface tension, the water drops stick to the sheet and move downward into a trough, from which it can be consumed.

Some of this information came from the Water Education Foundation and from the Corpus Christi TAMU-CC Public Administration.